It has been thirty years since the end of the War and no traces of the Bolzano concentration camp are left. In its place are huge council house estates and only a memorial stone to remind us of the 15,000 prisoners (the majority of whom were never to return) who passed through en-route to the German Lagers. The Bolzano Anti-Fascist Committee, the President of which is the mayor of the Bolognini city, wished to conclude the 30-year Commemoration, on 13th and 14th December, with an exhibition of the remaining war relics in the City Hall and a round table discussion. The participants were, the Hon. Venanzi (Vice President of the Senate and Partisan Commander), the Hon. Olivi (Silver Medallist of the Resistance), a representative of the Anti-Fascist Austrian Association, a representative of the F.I.R., a representative of the Merano Israeli community, Dr. Buffalini, member of A.N.E.D (detained for 8 months in the Bolzano concentration camp – 2 of which were spent confined in a prison cell) and of the Bolzano CLN, and last but not least, Ms Franca Turra <Anita>, member of the Bolzano CLN, who had kept in constant contact with the camp. On 14th December, after an honorary mass in memory of the Holocaust victims and the laying of the wreath on the memorial stone, a public gathering in a cinema followed, in which Mrs Mascagni, (Anti-Fascist fighter and member of the Anti- fascist Bolzano Committee) gave a speech. The Mayor of Bolzano then concluded the ìcelebrationî with a fine speech in which he underlined that the memory of the painful past was the responsibility of those still living and working in a bilingual area particularly subject to the problems of democracy and autonomy.

Finally, participants were invited to visit the Mignon army Barracks and after to a luncheon where War veterans were united with soldiers and officers alike in order to re-affirm the role of the Armed Forces as protectors of Freedom and Democracy in the Nation.

The Bolzano camp, set up to “sort” the political detainees and the Jews arrested in Italy and shipped to German camps, began its “mission” at the end of July 1944 with the arrival of prisoners evacuated from the Fossoli Camp.

Since 1943, some detainees from Alto Adige (civilians and military) were detained in this same camp; it was run at that time as a kind of “Military Discipline Company”. However, as the summer drew near, preparations began to be made for the arrival of an ever-increasing number of prisoners. 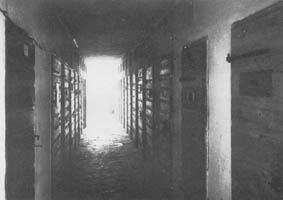 In a large bricked-up warehouse, a sort of hangar originally designed to be used as a storage for military goods, partitions were erected which divided up the warehouse into large rooms which became the so-called A B C D E F blocks. In addition, a kitchen was fitted out as well as a kind of roof space equipped with sanitary facilities.

The courtyard for the roll call was situated in front of the blocks, and facing these were some wooden barracks containing the SS canteen and the infirmary. At the entrance, there was the SS Command building and behind the infirmary a small lodge containing the laundry. In addition, some barracks were set up for the mechanicsí, carpentersí and electriciansí workshops.

At a later date, (October ’44 and the following months) the camp prison was built (the so-called prison cells) as well as the other barracks for the prisoners from G to M. Since the very beginning Camp A was designed for workers inside the camp: the camp leader, carpenters, electricians, mechanics, and tailors etc. Block F was set up for women, political opponents of the regime and Jews whereas Block E hosted twenty or so foreigners with whom no contact whatsoever was permitted. They were of different nationalities, probably soldiers, and one morning were taken out of the camp and shot dead at the Castle. No one ever managed to find out anything about them.

After this event Block E became utilised for the so-called <dangerous prisoners> with whom contact was forbidden. The whole environment was appalling and as everything was constantly shut up, the place was practically in permanent darkness. A stench emanated from the gangrenous, frozen limbs (there were many partisan arrivals from the mountains in the winter of 1944-45), which mingled with the cries of the feverish left pitifully without aid. At the start, there were about 1,200 prisoners but this number was destined to rise to over 2,000. Many of these were shipped to the subsidiary camps such as Merano, Colle Isarco, Bressanone; Sarentino; Malles and probably others.

Blacksmiths, carpenters, printers, mechanics, tailors and laundresses, all contributed to the ìsmoothî functioning of the camp and worked in their respective barracks, whilst the Jews, were considered fit only for cleaning. Some squads, (mainly women) were permanently assigned to cleaning the Germans’ houses; others worked in the cities or at the Virgolo tunnel and many women were given the task of sewing buttonholes in a curtain factory. Prisoners continuously passed through the camp and although their number fluctuated, it remained more or less stable around 15,000 detainees. Several categories of prisoners were not numbered; Jews, some policemen, who stopped over en-route to the German camps, several so-called <free workers> who were rounded up in Italy and sent to work more or less voluntarily in Germany, and finally some political figures, who on arrival, were immediately put in prison cells and only saw the light of day when they were to be shipped to the extermination camps in Germany. The population of the camps was extremely varied and indeed changed continuously. There were many Jews; almost all were destined for the death camps. Nevertheless, after February ’44 (in actual fact ’45 – there was a misprint in the original text NdR), 100-150 Jews remained in the camp as convoys of shipments to Germany could no longer pass along the Brennero road.

The other prisoners were all “red triangles”, that is, political figures, which included (besides all the varying “degrees” of anti-fascists) groups of so-called dissident fascists, unscrupulous collaborators, double-dealing spies, black marketeers, “redundant” ex-lovers of the Germans and other rather unreputable types.

A strange characteristic of this camp (which was later, however, encountered in the larger camps) was that, although the prisoners, arrested in Italy by fascists and Germans, arrived in the camp labelled as “anti-fascists”, they were without any form of documentation whatsoever regarding either their so-called criminal record, or indeed the motive for their arrest. For this reason, fighting partisans, political leaders, radio London listeners and enemies of the odd small fascist boss were all considered to be equally “guilty” and therefore, despite being totally harmless, were condemned to their deaths in Germany.

A political organisation existed in the camp from the very beginning; it was formed in large part from the organisation already active in Fossoli. Up until the very end, a CLN was active in the camp; it maintained constant contact with the Bolzano CLN and with that of Milan.

In the city of Bolzano, the work was organised by “Giacomo” (Visco Giliardi) and by “Anita” (Franca Turra); Virginia Scalarini, daughter of the famous caricaturist of the “Avanti!”, dealt with links with the Milan CLN. The first main job of the organisation was to conduct a continuous census of the camps’ population which, due the flow of arrivals and departures, fluctuated continuously. The organisation was also responsible for identifying political figures, keeping the prisoners united, giving help whenever possible and organising possible escapes. At the beginning of ’45, preparations were made for an eventual camp revolt as it was foreseen that the Germans, as a last defiant act, would resort to a total massacre of all prisoners, especially those in the prison cells. Opportunities for this revolt were, however, few (they could, in reality, sustain only a few mini- revolts, whilst the Germans were well armed and organised). The prisoners did, however, have one advantage over the Germans; they outnumbered them 2,000 to 30, (prison guards) and could hope for success in a surprise attack.

These preparations proved futile as these same Germans evacuated the camp during the last few days of April, after the arrival of the International Red Cross.

The Bolzano camp was not a “extermination camp” in the strict sense of the word and thus the prisoners were not subject to the well-known horrors witnessed in many other camps. They were allowed to keep their personal clothing, which they wore, underneath their prison uniform. Food, nevertheless, was scarce, especially for those who did not work and those locked-up in the prison cells.

In addition, there was no shortage of brutality in the camp; beatings, kicks and blows from clubs or horse whiplashes were the order of the day and handed out for the most trivial of reasons (if indeed there was a reason at all). Cruel beatings took place in the Command building and inside the cells. Two Ukranians, Otto and Miscia, were the main perpetrators of these barbaric deeds and 20 prison cell detainees were known to have been brutally murdered at their hands.

However, what the people feared most was the future. Understandably, they were tormented by the idea of being sent to an unknown destination (fortunately they were unaware of the unspeakable horrors which awaited them) and instinctively feared this impact with a cruel and barbaric world which seemed to signify a return to the darkest moments of history.

In the box is a note written secretly in the Bolzano Lager, by Ada Buffulini “Maria” and sent to “Giacomo”, (Visco Giliardi)  who, from Bolzano, co-ordinated the activity of assisting the deportees on behalf of the CLN.